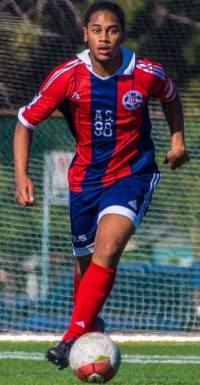 Transfer from Div1 school where he red-shirted for the Fall 2017 season (release available upon request). Seeks Spring/Fall 2018 transfer opportunities. Previously, Michael was on the Reserve for Team Canada U20 as well as U15 team. Captain of Team Quebec (1st team All State).MVP for the LSEQ U16 AAA (best league in Quebec for his age group). Nominated as a top 3 best athletes in the province in all sports in both 2015 & 2013.  He has been in this program since U13 and has always been captain of his team. He also played one year up in 2014 and 2 years up in 2013 in the NCHP. Named MVP of the Canadian national tournament U15 (Quebec-Ontario). MVP of his high school league in 2012-2013 and top scorer of the league (47 goals in 17 games).

Michael is a member of the national center of High performance (CNHP) of Quebec, where 23 players are choosen for their academics and soccer abilities. He is a very focused young man on and outside the field.  Michael is the type of player who dictates the pace of the game. He has a great vision of the game and is very good defensively. He is known for being a very intelligent player. He is very dedicated and has a never give up attitude.  Michael is an exceptional leader. He is humble and has a great relationship with his coaches and teammates.