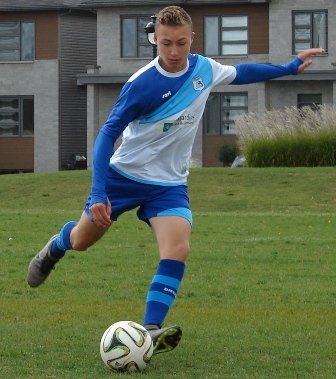 Jeremy won the title of best athlete of his high school. He plays for a U16 AA team, he won the title of the best midfield of his team. During the last soccer season, he played on Division 1 and was elected by his teammates to be captain of the team. Jeremy frequently received the title of the most valuable player of the match throughout the season. This mention is accorded by the coaches of the opposing team. At the end of the season, Jeremy won the award of best midfielder in the club and was the number one scorer of the league with 32 goals in 12 games. Jeremy has won the award for the student with the best GPA for three years in a row.

Jeremy participated in the Quebec games, he is also a winner of 2 provincial tournament and finalist in a national tournament. Jeremy is also captain of his team in Futsal (indoor soccer), his team won the league championship 3 years in a row and he was a dominant player with the most decisive passes. The team finished first of the season.

Jeremy is an extremely intelligent player. He is very agile with both feet; his short and long passes are part of his arsenal. He is an excellent decision maker on the field. Jeremy has an offensive style and is always in a good position but he is also aware of his defense. He has a lot of grit, yet he is very calm. His sense of anticipation makes him communicate well with his teammates. He takes free kicks. Jeremy has an excellent time management skill set. He is motivated, very mature and disciplined. Jeremy is a hard worker and has an excellent work ethic. He is successful at multi tasking.